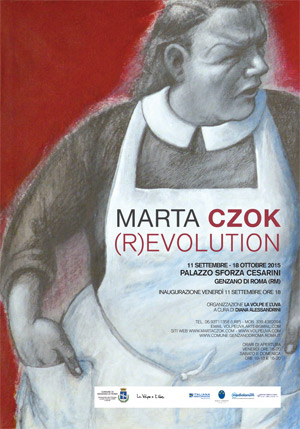 The works of Marta Czok collected in a solo show will be exhibited at Palazzo Sforza Cesarini, in the Castelli Romani area. The show opens on 11th September 2015.

Rome – A new show by Marta Czok will be opened on Friday 11th September  2015 at 6 pm inside Palazzo Sforza Cesarini. The exhibition, curated by Diana Alessandrini, is titled (R)evolution, a play of words halfway between revolution and evolution. Revolution recalls the stronger themes in Marta Czok’s paintings, namely war, power and its abuse, but also evolution, with reference to today’s changing society – with its delicate balances – to family as well as to contemporary art.

«The art of  Marta Czok wakes you up like an alarm clock  – says Diana Alessandrini. – Behind her refined and pleasant aesthetics and a very skilled painting technique, which has as its main characters sometimes historic personalities, whose life is still very current, sometimes powerful people depicted as in a caricature, deformed by the abuse of power, she says what no one wants to hear. And she does so while never losing her smile. Irony is indeed, together with her vis polemica, the strength of this great artist».

So we move from paintings such as Global Crisis, Summit Conference, on the lightness with which politicians seem to face the tragedies of other countries, to other works on the role of women in society, as in Testa, which depicts a woman wearing a Mary-Antoinette-like wig with a complicated structure that allows here to support her head: «Most fashion innovations for women were created to reduce their possibility of movement, from high heels to tight bustiers, to huge skirts», says Marta Czok. «Women needed to stay in their place or, basically, they had to have no possibility of running away».
Happy Families is also ironic, and extremely direct. It depicts two couples inside a home. The roof recalls houses drawn by children, and the dream of Prince Charming, yet the faces, those of the Dukes of Urbino and Van Eyck and his wife, are dark and surly and the house is in fact on the edge of precipice – «it’s a bit like in everyday life, in most cases».

The art of Marta Czok is thus a «boundless art, characterized by classic grandeur, Flemish miniaturism, expressionist caricatures and – provokingly – a pop use of colour which “livens up” the moving monochromatic use of her beloved gray, it speaks through enigmas and rebuses. Once we solve them, we cannot remain indifferent».

The exhibition will be open until the 18th October 2015.

On the occasion of the opening we will toast with the wines produced by Marco Carpineti in Cori (LT).
We thank the other sponsors who have contributed in the making of this show:  Italiana Assicurazioni, l’agenzia di Genzano di Banca Mediolanum, Immobiliare Castel Gandolfo